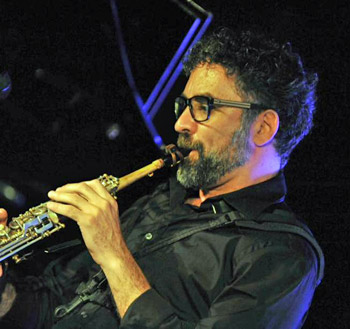 Guido finished, with honours, his Masters Degree at the Dutch National Academy of Music "Swellinck" in Amsterdam, under Henk van Twillert's guidance.

He gained scholarships as Dragoni scholarship, Ferrero scholarship and the prestigious Top Talent in Netherlands. Besides, he was awarded the first absolute prize among all the categories of soloists in two international competitions and the second prize in the chamber music category.

Specialized in performing classical and contemporary music with all sizes of saxophone but also free improviser, he regularly plays in prestigious festivals and theaters all over Europe and collaborates internationally with composers making recordings and CD productions as saxophone solo and as a member of chamber music groups such as the "ARTefacts Ensemble" of Athens, "Tania Giannouli" Ensemble, "Rafi Music Theatre Company", the "Red Chicken Soup Duo" (Saxophone Percussion), Ergon Ensemble, the "S.T.A.B." saxophone quartet, the "Medeaeletronique" the "Kerkezos" saxophone quartet, etc.

As a soloist with orchestra, Guido has already had more than fifty concerts to his credit.

For the last three years he has been traveling all over Greece with the Onassis Foundation program about Child Autism, as a performer and animator. He has collaborated with Metaichmio children's books as a composer.